Energy Shortages: This is a four-part series looking at how climate impact is rapidly changing our world and the coming challenges as we make the transition to a future that is climate sustainable.

Decarbonizing energy generation and consumption must be accomplished as quickly as possible. But the increase in electric load and decrease in capacity to meet that load is projected to lead to power outages and rolling blackouts in the next few years, especially in winter when load in the region peaks to meet heating needs. In the chart below, note the two red circles which denote the point at which the capacity (hydro, solar, wind, coal, natural gas and imports) is less than the peak demand load Planning Reserve Margin (PRM). The PRM is set about 15% above typical expected load, to have some headroom to handle unexpected spikes in load such as during winter cold snaps.

It is worth noting that this forecast probably understates the current outlook, since is was prepared before passage of CETA’s accelerated decommissioning of coal power plants, which further reduces capacity. And it also doesn’t include the emerging increase in load from electrification of transportation and heating.

When load exceeds the capacity, power outages and rolling blackouts result. And in the coming decade, this capacity deficit is projected to steadily increase, heightening the likelihood of outages (see chart below).

As shown above, by 2030, the capacity deficit could be as much as 10 GW (10 billion watts). To give some idea of the physical scale of a project to fill that gap: 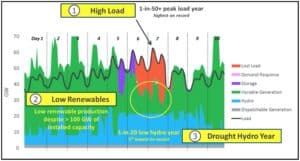 The chart provides an example of how the combined energy produced varies with time of day, weather, climate, wind and sun conditions. The blue area is hydro, green is a combination of wind and solar, purple is battery storage, and red is a deficit, where the combination of hydro + wind + solar + battery is unable to meet load (black line), so a blackout occurs.

In this example, it is a drought year, with lower than normal hydro flow, wind + solar output is weak during days 5, 6, 7, 8 and 9. And the battery storage fully discharged on day 6. Note that winter solar output in the northwest is about one-fifth of what it would be in summer. And, overcast days and windless periods can go for weeks, requiring adequate backup hydro or battery storage (very expensive compared to hydro or natural gas) to “firm” them up.

To minimize capacity shortfalls, regional governments and utilities are working together to develop a combination of new wind and solar capacity, firmed by hydro and battery storage, with natural gas turbines as a last resort (due to carbon emissions) in emergency conditions.

OPALCO is working to reduce its dependence on the mainland for energy generation. OPALCO’s Integrated Resource Plan (IRP) calls for decreasing our dependence on mainland power by up to 50% by 2040. This plan increases our local energy resilience, especially for population centers (town and village) where essential services are located.

Quick Fact: Where Does OPALCO Stand on Regional Power and the Dams?

DIY Weatherization Tips for a Warmer Winter Home January can be our coldest month of the year – and we’re typically spending more time indoors. You can make a difference … Read more

Kai Burleson is a Lopez High School graduate and has been a Journeyman Lineman since 2008 after a four-year apprenticeship with OPALCO. Kai is the Lopez Island Substation Technician and … Read more

Due to the extended cold snap in December, OPALCO members are going to see a big jump on their next power bill. Extreme winter weather means our heating systems are … Read more