TYPICAL RESIDENTIAL MEMBER WILL SEE AN AVERAGE 9% INCREASE IN 2015

OPALCO leadership has approved a new rate structure and 2015 budget that include rate increases for all members. There is no getting around it: we are facing expensive submarine cable replacements beginning in 2015 and continuing for the next 20 years. In addition, we have to make up for a $1.4M revenue shortfall in 2014 due to warmer temperatures and we expect the warming trend to continue.

The typical member will see an average 9% increase in their bill beginning with the February billing cycle. The 2015 budget targets an increase in revenue of 12% overall, but actual impacts to average residential member bills are less due to the redistribution of costs in the new rate structure, designed for greater member parity. Seasonal members and those who put the highest demand on the system will see greater increases as the new structure ensures each rate class pays its fair share of their actual cost of service. The budget also forecasts a 6% revenue increase for each year between 2016-19. See the full 2015 budget for greater detail.

“We are either installing a submarine cable or financially preparing to install submarine cables for the foreseeable future,” says Foster Hildreth, General Manager.

The cost of replacing our submarine cables has gone up tremendously, mostly due to increased environmental mitigation. The last time we replaced a cable in this crossing (1994), it cost about $5M; the current project is estimated to cost at least $15M. We must build equity and revenue through rates to manage this significant debt service.

A small piece of the rate increase will fund the start-up of our new Internet services entity. The start-up cost is $7.5M over the next three years. The impact of this debt service on our membership will average $3 per member per month for 24 months, included in the facilities charge (approximately 19% of the total revenue increases for 2015 and 2016).

The wholly-owned subsidiary is expected to break even and start generating a positive cash flow in 2017, just in time to help offset the loan expenses (interest and depreciation) of the first submarine cable replacement. 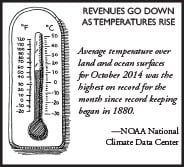 “I realize this increase is a tough pill to swallow,” said Foster Hildreth, General Manager.

“Serving 20 remote islands is no small task: with 27 submarine cables, 1,328 miles of power lines (95% underground), 11 substations and 3 line crews, we are the most complicated and expensive utility in the nation to operate and maintain. I commend our Board for taking decisive action to protect the co-op and lay the groundwork for the major capital projects that we know are coming. We are committed to increasing the Co-op’s financial stability to get us through this challenging period of warming temperatures and cable replacements.”

“I very much appreciate Foster’s leadership, both in the day-to-day operations, as well as in dealing with longer-term issues of crucial importance to our Co-op.” Vince Dauciunas, Board Member stated.

To ensure reliable electric service into the future, we will continue to make the necessary investments in our system, including replacement of aging infrastructure, the grid control backbone and the submarine cables that connect us to the mainland and to each other.

We have a unique utility to sustain us in a beautiful and sensitive environment. We all value our natural resources and quality of life in the islands, and it comes at a cost.

The good news is, we still have some of the lowest cost (per kWh) and cleanest electricity in the nation due to the mostly hydroelectric generation we get from BPA.

Learn more about OPALCO energy sources and rates by reviewing this presentation to the Board.

The volunteer member Elections & Governance Committee (EGC) has completed their nominations process and selected a slate of candidates for the 2023 OPALCO Board of Directors election. There are two … Read more

In the heart of Orcas Island, on Madrona Point, stands the historic Odd Fellows hall, which has served as a community hub for over 130 years. The hall has seen … Read more

DIY Weatherization Tips for a Warmer Winter Home January can be our coldest month of the year – and we’re typically spending more time indoors. You can make a difference … Read more